American badgers measure 520 to 875 mm from head to tail, with the tail making up only 100 to 155 mm of this length. They weigh 4 to 12 kg. The body is flattened, and the legs are short and stocky. The fur on the back and flanks of the animal ranges from greyish to reddish. The underside is a buff colour. The throat and chin are whitish, and the face has black patches with a white central stripe, which extends back over the head from the nose. In northern populations, this stripe ends near the shoulders, but in southern populations it continues along the back to the rump. Males are significantly larger than females, and animals from northern populations are larger than those from southern populations.

American badgers live in dry, open grasslands, fields, and pastures. They are found in many different places from high alpine meadows to sea level.

American badgers are excellent diggers, and can tunnel rapidly through the soil using their powerful forelimbs.

Badgers are carnivorous. Their dominant prey are Pocket gophers, Ground Squirrels, Moles, Marmots, Prairie dogs, Woodrats, Kangaroo rats, Deer mice, and Voles. They also prey on ground-nesting birds, such as Bank swallows and burrowing Owl, Lizards, Amphibians, Carrion, Fish, hibernating Skunks, Insects, including Bees and Honeycomb, and some plant foods, such as Corn and Sunflower seeds. Unlike many carnivores that stalk their prey in open country, badgers catch most of their food by digging. They can tunnel after ground dwelling rodents with amazing speed. 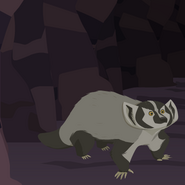